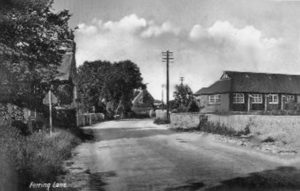 Ron Fleming (for many years Treasurer of the Village Hall, who died some years ago) wrote this history in 1995. This abridged version was edited by Ed Miller.

‘In Ferring Street did Mrs H/a sturdy Village Hall decree/Where Rife, the Ferring river, ran/Through banks as yet untamed by man/Down to a shingly sea..’

Mrs H was Georgiana Alma Henrietta, widow of the late Edwin Henty (of the brewing and banking family, and third-generation occupier of Ferring Grange). In 1924 she gave, in his memory, an open plot of land to the north of the village, to be held for the benefit of the villagers generally, and had built on it a handsome Village Hall. The design and quality of the workmanship were such that all these years later, the original windows are still fully serviceable and apart from needing cosmetic attention the old structure is as good as new.

Ferring at that time had some 300 inhabitants and was largely clustered round around the church. A road ran off at the new War Memorial and took a winding route down to the sea, where it stopped: there was no connection to Goring. The only way into and out of the village for vehicles was from the Littlehampton Road, via Ferring Lane or Langbury Lane, which united at the New Inn (after 1928 the Henty Arms) and crossed the railway line into Ferring Street. On the west side there were a number of dwellings down to Rose Cottage, and then a break before the school and the buildings around the Vicarage. On the east side there was nothing, apart from the Gatekeeper’s Cottage and what is now ‘Truevision’. So when the Hall was constructed, on rising ground amid green fields, it was an outstanding building.

The design was simple but imaginative: a rectangular building with small-paned windows in each side and an entrance door at the north-west corner reached through a porch (a photocopy of the Building Plans hangs in the Griffin room today). The lighting was by oil lamps on chains which were pulled down to fill and light and then pulled up again. Running water had just come to the village, but not sewerage, so that although there were pipes bringing water into the single inside flush toilet drainage was to a cess pit in the south-east corner of the plot. The first caretaker of the Hall was Mrs Wesson, who, with her husband Sidney Wesson, ran the village shop and post office in ‘Landalls’ across the road.

In the year the Hall was built Mrs Henty (who had no children) began to sell off the family estate (some two thirds of the parish), and houses were built rapidly in South Ferring. Between 1921 and 1931 the population of Ferring more than tripled, and more social facilities were needed. In 1929 a billiard hall was erected, by public subscription, to the north of the Hall, and the two buildings remained quite separate until well into the 1930s. The billiard hall (now the Club Room) was also lit by oil lamps and it is still a feature of the insurance policy that the company is not responsible for damage to the baize cloth caused by sparks.

Extensions and alterations in the 1930s

As the years passed the use of the halls developed and extensions were added joining the two, so that by the outbreak of war they were one composite building. A stage, with orchestra pit and underground storage had been constructed behind the original Hall and a boiler room had been built behind the billiard hall: this boiler was presented by Mrs L A Brown, in memory of

her husband. Also, a Committee Room had been constructed alongside the boiler room and as a continuation of the billiard hall. To the north of the main hall, an extension had been built containing a kitchen, two inside toilets, and a corridor leading from a new side door, down the side of the stage, and up to the Committee Room. The original front door was sealed off and new double doors were made, leading into a vestibule, and then into the Hall itself.

The main hall was quickly pressed into service in September 1939, as a schoolroom for the scores of children evacuated from south London. Most of these returned home during the ‘Phoney War’ and the Hall was used for other purposes: the Billiard Hall was used by the Red Cross and the main hall for ARP lectures, various fundraising events, and in the evenings for dances – especially when the Canadian troops were stationed in the area.

Mrs Henty’s executors sold off the northern half of her estate in 1930, and housing development received an extra boost. Growth was rapid again, and the population may have reached 1,500 by the outbreak of war (double the 1931 census figure). The 1940 map, now displayed in the Griffin Room, shows Onslow Drive had been built and so had most of Elm Park. The Onslow Parade of shops – to the north of the Hall – had been built as far as the corner of Elm Park but to the south there was still only an open field. Goring Way was just beginning to be built, and houses were beginning to appear on the east side of Sea Lane, north of the Ilex Walk. After the war the housing developments started up again: by 1951 the population had grown to 2,200.

With the population growth had come a new factor: retired people with plenty of time and energy, and a need to occupy them. FADS and the Ferring WI had long been active (FADS as far back as 1931) but now new organisations had come into being and new ventures launched. The Committee had run a weekly whist drive on Mondays, an annual fête in August (on the field behind the Hall) and a children’s party at Christmas – but now the whole pattern of use had to be re-thought. Hitherto, the bookings had included a free hour before the ‘booked time’ and half an hour after, to allow setting up and taking down of equipment, but this was stopped, to fit more bookings in. It was at this time that the oil lamps were removed and the pendant electric lamps were installed in the main hall (the fluorescent lamps in the rest of the building came later) and the new maple strip flooring laid for dancing (Army boots no longer a problem).

In the 1960s the Hall continued to be used intensively but no major changes were made to the building. The Hall Committee prided itself that it had among its members most of the skills that were needed to repair and replace fittings as they wee damaged or wore out. This was financed from lettings income but from time to time outside benefactors paid for specific improvements - for instance a large donation from Mrs Erroll Cunliffe paid for the central heating system to be completely renewed in 1970.

This allowed the old boiler room to be converted into a second kitchen and for the creation of two new toilets and a range of lockers in the passage behind the stage. The reserves could not fund this improvement so an appeal was launched, and the villagers responded – over £800 was received and the work was completed in 1974. A further donation, £3,000 by the WI (out of a bequest from Mr Sadd) paid for a complete overhaul of the main kitchen in 1976/7. By now a number of other large refurbishment items were arising which the Committee could ill afford, and at Christmas 1984 FADS put on a pantomime to raise funds – it raised £900, and financed much of the work.

Then came the next blow. The Fire Service wanted a fire path right around the Hall and the Environmental Health Officer demanded more toilets. The Committee wee well aware that the usage of the hall had far outgrown its facilities. The only course was another extension, and yet another appeal to the villagers. Our cash reserves stood at under £8,000 and we needed over £30,000. The appeal actually raised nearly £50,000 in gifts and interest-free loans, and we expanded our objectives. We finished up with not just a fire path and more toilets but a new Griffin Room (with a kitchen), four toilets at the front and three at the back, all with hot water at last and new ‘furniture’, plus a tarmac-surfaced car park and a new flint wall at he front near the old Post Office, almost the whole of the interior repainted, a storage room, at last, for our chairs and a waiting room for visitors arriving before their booked time.

‘Since this great effort,’ wrote Ron Fleming in 1995, ‘the Committee has replaced the side entry doors, bought new curtains for the Club Room (and blinds for this room and the main hall, bought new chairs for all three rooms (with a grant-in-aid from FADS), fitted cooling fans in the main hall (with grants from FADS and the Amicitia Dance Club), had the grounds landscaped and kept in order by the Country Centre, bought 24 large aluminium tables’. He ended his ‘brief history’ by saying ‘What a magnificent Hall Ferring has .. and all due to the generosity of the villagers whenever they are asked, and the devotion of the Management Committee’. He listed the users of the Hall at that time and finished with ‘Long may it continue to serve the Villagers of Ferring who, as I have shown above, are never backward in supporting the Hall in any crisis’.

To Download a pdf version of the history please click the following link: Village Hall History by Ron Fleming